An excerpt from AMARGOSA AMBUSH 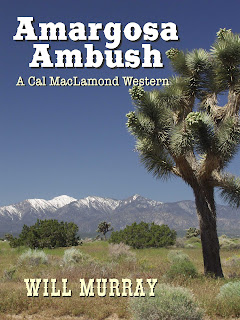 Does a Quick-Draw Matter?

Cal MacLamond always said, "In most cases it don't. Straight shootin' is what matters. But when you and the other fella are so close you can't miss, then the quick draw matters quite a lot."
Posted by Will Murray at 4:09 PM No comments:

Law and Saloon West of the Pecos

I wonder how many folks know that "Judge" Roy Bean used to run a saloon in California out by the old San Gabriel Mission. (Speaking of which, I also got to plug an all-time favorite Western movie, The Westerner.)
Posted by Will Murray at 9:20 PM No comments:

Am reading Andy Adams books re. cattle drives in the old days from Texas to Montana, etc.. Interesting view of 19th Century Texas and its cowboys. Non-fiction by a real cowboy, and an A-1 story teller.
Posted by Will Murray at 11:44 PM No comments:

Just a quick note. My short story "Spanish Needle" is a free download for five days through the Kindle Direct Publishing program. You can "purchase" it right here. 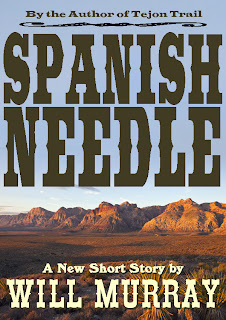 This is a standalone story, not part of the Cal MacLamond series:

When a pretty young girl is kidnapped by outlaws along the dangerous road from the Mojave to Kernville, two Civil War vets head out after her in a desperate race against time.

This was a story I'd originally written a few years back (try a couple of decades or so!) and submitted to a print magazine. The editor at the time was very complimentary but the marketing manager felt the story was "too literary" for their audience. I don't know how literary this little story is, but it's nice to have a chance to get it out to readers.

This kind of opportunity is probably one of the best things about our new digital age of publishing.
Posted by Will Murray at 12:37 PM 1 comment: